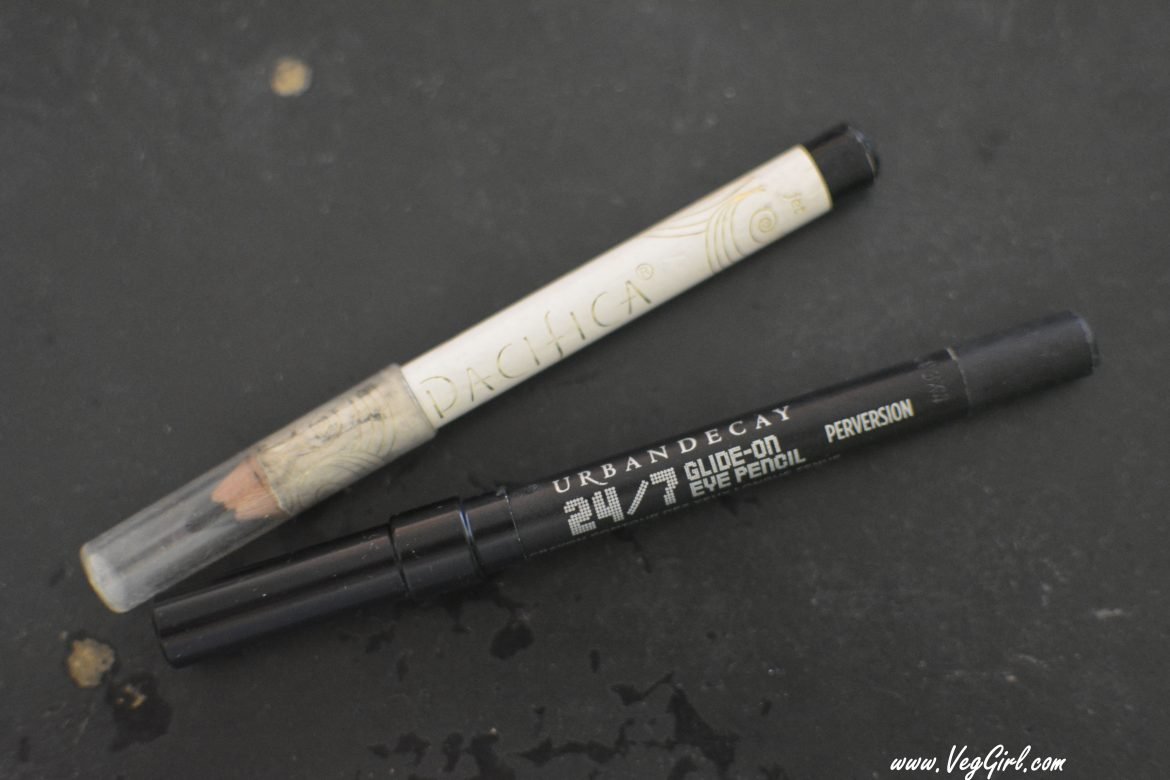 In a Vegan Throwdown of old vegan versus new vegan, this Veg Girl has squared off two of her ride-or-die favorites products and brands, Pacifica versus Urban Decay! Back in the day, this Veg Girl was head over heels for the brand! I love the edgy vibe of the brand and the high-quality products. True fact: one of my first blog posts was about Urban Decay! Their bold colors do not disappoint even when it comes to seemingly ordinary products such as eyeliner. If you were an Urban Decay lover like me, you know exactly what I’m referring to… Perversion! See. Edgy name, right? I loved saying that need to go get some more of that. Lol! You also needn’t say anymore since the product’s color name soon became a cult favorite as it was the best jet black liner you could find, vegan or not. The first thing that really stood out about this eyeliner was the ease at which the pencil liner (pencils are known for being dry and tough to roll on the ole’ waterline if you didn’t know) glossed over your lids beautifully, like butter! My waterline had never felt nor looked so good! After that, the deep, rich, black color popped like no other eyeliner ever had for me. It was epic! And trust me when I say I know my eyeliners! From go, and by that I mean the ripe old age of 11 which is when I started wearing makeup, my go-to item of choice was eyeliner. In fact, that’s the only product I would wear for a couple of those early makeup years. The sight of me with just a straight bottom line of eyeliner would earn me the nickname of Cleopatra. Granted I was not winging it out like she did, but I just rocked that liner.

Given my history and the discovery of perversion, I was devastated when Urban Decay was sold to an animal-testing parent company and seemed to be losing their vegan status. Don’t get me wrong! The brand still marks many products vegan, and it’s a personal choice how you feel about that. However I was also torn over the price. My makeup bill was getting crazy and that would often make me feel a bit icky! And, that may be how others feel too. Urban Decay is a higher-end brand with a higher-end price point at around $20 per pencil, while Pacifica is usually around $11 per pencil. What about those who want a vegan product at a drugstore price? Do they have to settle?

I used what I had left of my perversion and started exploring new products. That was about 3 to 4 years ago now. Lucky for me, I was able to land on Pacifica’s Jet Black eye pencil and have been HOOKED ever since. Yay! I absolutely LOVE this product and felt so relieved when I finally found it. 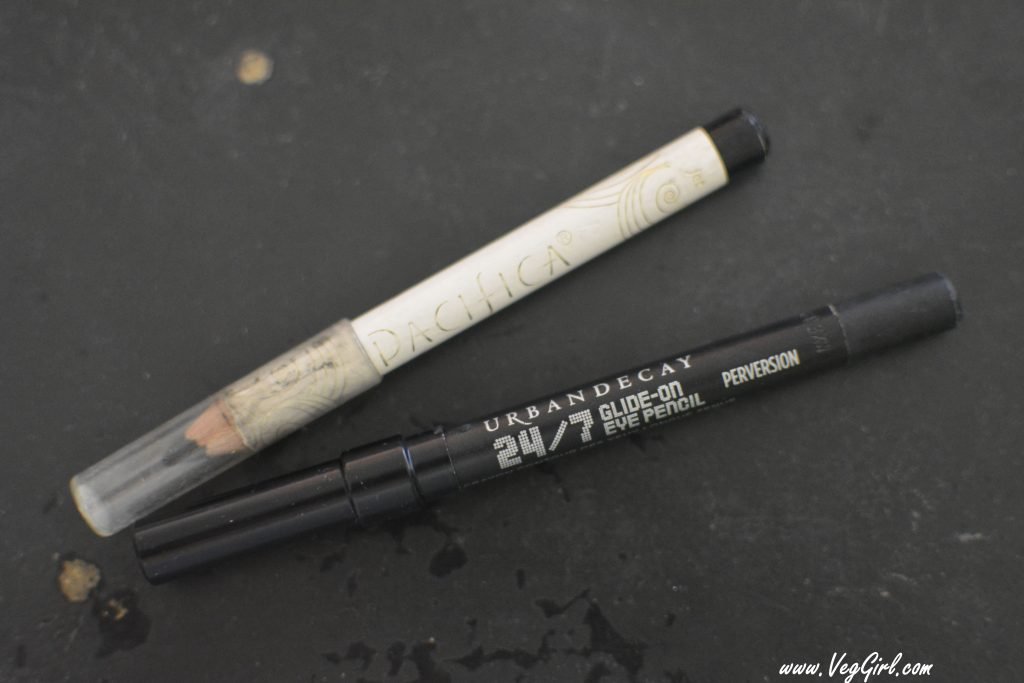 Not having more Perversion to compare, I always wondered how it stacked up to my old favorite… I felt mostly satisfied, but anytime you’re forced (so to say) to change, it feels like you’re going down the ladder instead of up. Do feel like that too? Recently, however, I received a sample of the Urban Decay Perversion in my Ipsy bag (they’re great about sending me vegan labeled items). Instead of just tossing it in my new makeup drawer, I decided to give it a whirl and test it against my Pacifica Jet Black (the new ride-or-die), and see how’d they compare! Challenge accepted (though they didn’t have a choice, so cruel)!

The only preparation was an even sharpening of each pencil and no lighters were used (nor do they need to be for the waterline of these two gems). The top eyeliner on both of my eyes is the same Elf liquid eyeliner, as per usual. One eye is lined with Jet Black and the other perversion.

Take a look at the following 4 photos and try and guess which is which? Does one stand-out?

Can you spot the drugstore brand versus the department store brand?

If I didn’t already know, I would not think based on these pics that this person was wearing two different eyeliners in their waterline, but in fact, it is true! It’s so hard to tell. To me the results are clear, Pacifica’s Jet Black is clearly just as amazing, pigmented, and smooth as Perversion. If I notice any difference, it’s that the eye you see on your left appears to be a bit sharper while the one on your right appears a bit thicker and almost smugged. Though, I think that may be due in part to my hand as my lines tend to be more of sisters rather than twins. 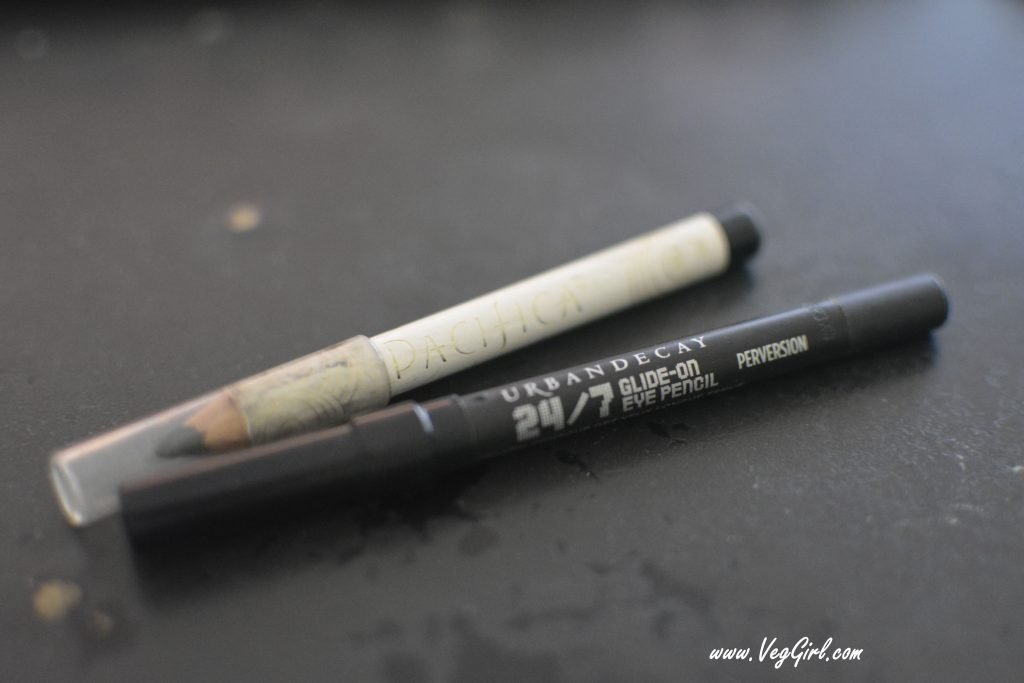 Have you guessed which one is the infamous Perversion and which is Pacifica Jet Black?

For me and I hope you, this just goes to prove you can absolutely find AMAZING vegan makeup at the drugstore that is just as great if not better than your ride-or-die non-vegan or department store makeup. If you don’t think so, just let me know what you’re addicted to, and I’ll find you a dupe and then challenge you to do a Vegan Throwdown!

The winner? As with all great vegan products, the animals!

PS: It should be noted that Perversion does not contain any animal by-products and is marked vegan, but since it’s now owned by Loreal, its parent company, that tests on animals, not everyone considers it vegan since animal testers invariably profit from the sales. I personally LOVE supporting cruelty-free items and brands and do not take parent companies into consideration too much since I want to show all companies (restaurants too) that vegan items matter, are in demand, and are highly coveted within this market! I just wanted to mention this and explain my journey since I know some people will get a bit up in arms about Urban Decay’s vegan status. I hear ya and respect all opinions!

Wantable Unboxing and Try-on for January 2018